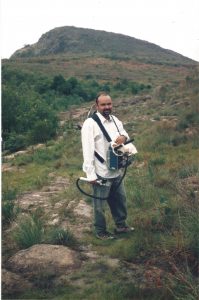 Eduardo was an inspiring plant scientist who encouraged everyone to think and question the meaning of concepts, hypotheses, and ecological theories. At the beginning of his career during the 80`s, still as an undergraduate student at the Federal University of Rio de Janeiro, he began his studies on inselberg plants and their survival mechanisms to abiotic stress. It began there, on the sloping rocks of Rio de Janeiro, the ascent of a great scientist whose legacy spans generations. In the following years, from 1990 to 1996, as a master and doctoral student at the Federal University of São Carlos, he made contributions to the ecophysiological knowledge of gas exchange, water relations and oligotrophic sclemorphism in Cerrado plants. As a PhD student, he spent some months at the University of Darmstadt in Germany under the supervision of Professor Ulrich Luttge studying photosynthesis and gas exchanges. From this fruitful partnership and due to his great dedication to science and critical thinking, Eduardo conducted studies on chlorophyll fluorescence during crassulacean acid metabolism (CAM)-phases, expression of CAM, mechanism allowing plants switching from C3-photosynthesis to CAM and gas exchanges, leading to a remarkable scientific production placing him as one of the most prominent Brazilian researchers in this field during the following years.

He returned to Rio de Janeiro in 1999 consolidating his career as a Professor in the Department of Ecology at the Federal University of Rio de Janeiro (UFRJ). In partnership with Professors Fabio Rubio Scarano and Dorothy Sue Dunn de Araujo, he conducted pioneering research on the ecophysiology of Restingas, Campos de Altitude and Atlantic Forest plant species, in addition to continuing research in the Cerrado and Campos Rupestres. He published more than 60 papers and book chapters, guided more than thirty undergraduate, master’s and doctoral students and post-docs with dedication, patience and, above all, affection.

During the following years, he expanded his interests resulting in important  contributions to plant ecophysiology to the role of morphological, hydraulical and reproductive traits to explain mechanisms associated with plant community assembly and their responses to environmental changes. These research lines lead to high impact publications about the importance of functional trait networks and alternative plant designs for community assembly and their consequences to ecosystem functioning. Recently, despite the moment of scientific, educational and humanistic setbacks we are living in Brazil, he never gave up fighting in the best way he believed to make the world a better place: guiding his students and teaching his classes with great dedication.

Between 2011 and 2014, Eduardo was the Coordinator of the Ecology Graduation Course at UFRJ, contributing to create a rich academic environment which was friendly to the debate and exchange of ideas, as he liked to say. In 2019, he started to dedicate himself with enthusiasm to Agroecology which he believed could be a way to bring back hope to students and, especially, to foster environment conservation and socio-environmental justice. He never placed himself in a higher hierarchical position, he respected his students and colleagues, always promoting, with a sense of humor, an environment rich in ideas and dedication to science. He leaves not only a legacy as a scientist, but a human legacy due to his influence on the training of students, scientists and teachers.

Eduardo passed away prematurely, at the age of 57, before making all the great contributions he would still make to science and to the education of so many students. It was a great honor for us, former students but also friends and co-workers, to learn and share so much. We, like so many others that had such privilege, are honored to carry on his legacy for science, education and environmental conservation in Brazil.